software as a story
≡

“I bet you the bill that dude by the window is Canadian,” I challenged.

This is part of the SaaS series. Any connection to reality will be strictly denied

Sam, my favorite architect, glanced over the top of his menu and nodded his acceptance. Sam was over-confident given I’d lost our last two design debates.

But, as a Canadian engineer, I happen to know a bit about Mohawk Indians, Canadian bridges and epic failures, and I have no qualms about using said knowledge to pay for my IPA.

You see, in the early 1900s, the Mohawk Indians found a profitable outlet for their intense, fearless nature - steel working. Their boundless courage enabled them to rivet steel girders 80 stories above the ground with the same vigor they ferociously displayed on the battlefield in days gone by.

Mohawk men were the preferred steel workers of the time and with their help, construction began on the Quebec Bridge - the largest bridge in the world in its day. Soon after work began, the lead engineer discovered a problem. The bridge wouldn’t hold and collapse was imminent. He warned management, but was ignored. This negligence resulted in death.

Because an engineer didn’t do the right thing, the bridge fell and took the lives of 33 Mohawk steel workers with it.

This tragedy still serves as a guiding principle to engineering students today. The students’ wise predecessors had portions of that fallen bridge forged into iron rings, which are passed on during a secret ceremony, reminding graduating engineers to place ethics and moral obligations on the same tier as physics and mathematics. Just like the rings’ previous owners, today’s engineers hear the “clink, clink” on their desks as they work and are reminded of this paramount obligation.

The food was fantastic, and I clinked the table with my ring as Sam paid for my dinner! 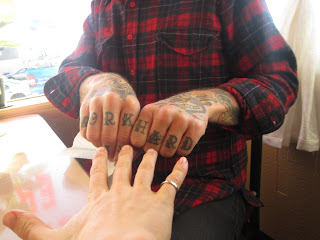